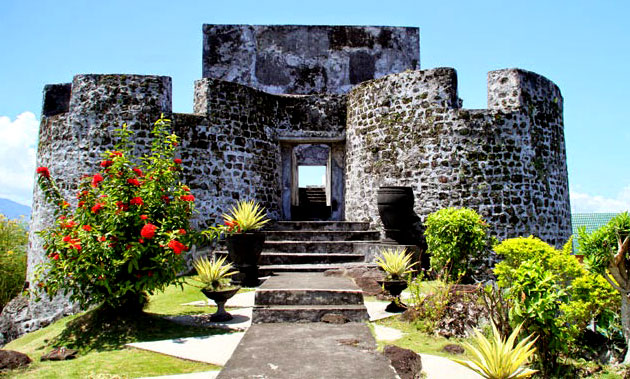 Passionate travelers may have recognized the presence of historical sites located in Ternate Island, including Tolukko Fort. This one is located in North Sangaji Village and belongs to North Ternate Sub-District, actually. It was built by the Portuguese who invaded North Maluku for spices back then. Not only it becomes the nation’s treasure, but it also has been included in the list of the most recommended vacation destinations in North Maluku Province. The site is popular due to its unique structure and stunning views of the panorama, so they can enjoy numerous activities like photography and sightseeing there.

The Nuance
In a nutshell, Tolukko Fort functioned as a base and spice storage at the time (during the reign of Commander Fransico Serraow). The good thing is that the fort resides in a strategic location, which is on a highland and near to the sea. That means traders were able to access the site without hassles back then. Today, though, tourists take advantage of such benefit in order to enjoy sightseeing from the top of the fort. They are also impressed with the majestic design of the building and often use it as the background of photography. Don’t forget the fact that the site features a beautiful park too!

Exploring Tolukko Fort
The most interesting thing to do in Tolukko Fort is definitely to learn the history. In this case, tourists can take advantage of a local guide’s service for more thorough information regarding the history of the fort. It is said the builder was Portuguese and the name was Santo Lucas Fort. However, in 1577, Ternate Sultanate took over it before the arrival of the Dutch. During the reign of the Dutch, the name changed to Hollandia Fort, actually.

So, why is the name Tolukko? According to the locals, the name derived from one of Ternate’s Sultan called Kaicil Tolukko. He ruled Ternate in 1692, for the information. Another source says that the name is inspired by the modification of the original name “Santo Lucas”. It is said the locals weren’t able to pronounce it well so they said Tolukko instead. Despite the difference in terms of information, both stories are worth to hear for tourists.

The next allure of Tolukko Fort is the story regarding the presence of a secret pathway that is translucent to a coastal area. It is said the Dutch and Portuguese used this passageway as a medium for escaping when any fierce rebellion or confrontation occurs. According to the locals, though, this pathway was closed by the government in 1996 due to safety reasons. So, what can tourists do aside from learning the history of the fort, though? It is either sightseeing or photography. The reason is that the fort is located on the highland, so tourists are able to enjoy beautiful panorama up there.

How to Get There
From Ternate City, a trip to Tolukko Fort takes about 17 minutes as the distance is 5.9 km. This becomes faster if they take Pemuda Street, though. The first destination is North Ternate Sub-District. Next, tourists only need to get to North Sangaji Village where the fort resides.