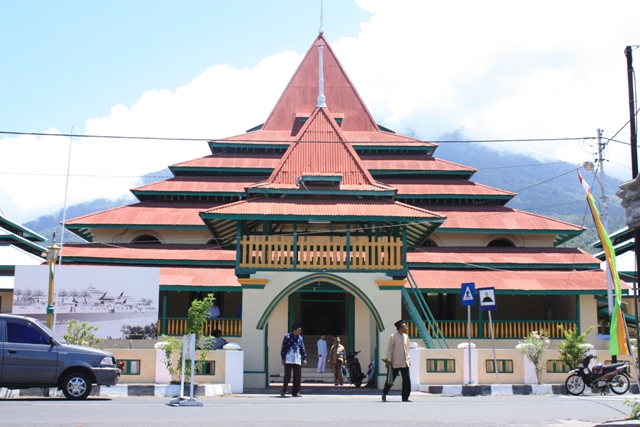 Perhaps many travelers have recognized a unique mosque in Ternate Island called Al-Munawaroh. However, it is not the only interesting mosque for them to visit during a vacation in Ternate. For example, there is one called Sultan Ternate Mosque or Sigi Lamo. The location is in Soa Sio Village and it belongs to North Ternate Sub-District. According to the locals, the construction started during the reign of the 2nd Ternate Sultanate in the reign of Sultan Zainal Abidin. Some other sources say that the mosque was built in the 17th century during the reign of Sultan Saidi Barakati, though. Despite the difference, it has become the witness of Islam development in Indonesia and becomes another tourist attraction as well.

The Nuance
Here is the fact. The mosque resides by the road so it is quite noticeable for everyone, especially tourists. In terms of architecture, it is indeed unique (unlike regular mosques that have a dome roof). Instead, it applies a cone-like roof shape or pyramid with 6 levels or “undakan”. At a glance, the design is similar to that of an old Javanese mosque. Still, it features stronger materials so it is able to withstand the age until now.

Exploring Sultan Ternate Mosque
Well, now it is the time to talk about the role of the mosque when it comes to tourism. The fact is that tourists can do many things on site. For example, they may explore the mosque and enjoy its architecture. Here is the good news. Visitors are allowed to take pictures using the camera either on its interior or exterior as long as they do not cause a disturbance to worshippers. For those who want to explore the mosque, they also need to take care of the environment. A mosque is a holy place, after all.

According to the locals, several rules apply to those who want to enter the mosque. For example, visitors should wear a “kopiah” or skull cap when entering the mosque. Also, those who want to conduct worshipping should avoid wearing a “sarong”! It is recommended to wear trousers instead. So, what is the reason? It is regarding the belief that worshipers’ feet may form an Arabic letter of Lam Alif when praying. Another uncommon rule is that women are not allowed to enter the mosque!

The next thing that tourists can do in Sultan Ternate Mosque is to learn the history. It has become an important part of Ternate’s society, after all. In a nutshell, the mosque gives a significant impact on the society’s behavior, especially regarding religion. Recently, the locals use the mosque as a gathering place during special occasions and rituals as well.

How to Get There
From Ternate City, a trip to Sultan Ternate Mosque only takes about 13 minutes as the distance is 4.1 km. Not to mention the location is on the roadside, so it is quite accessible for any types of vehicle. Still, for the best experience, tourists should take Yos Sudarso Street only.