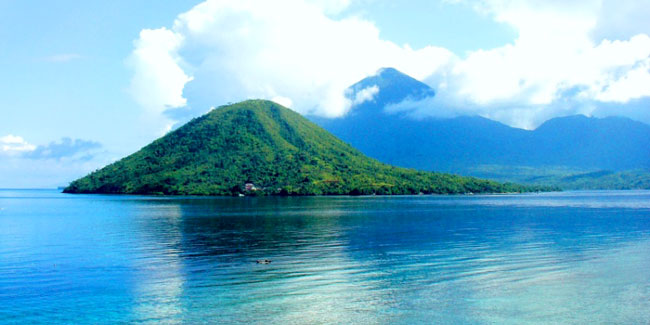 Ternate Island is part of North Maluku Province and it is where the capital resides. However, not all tourists are aware of the presence of small neighboring islands like Maitara. Those who live in Indonesia perhaps are familiar with this island as it is printed in a thousand Rupiah banknote along with Tidore Mountain. Despite the small size, it has been chosen as a great alternative to enjoy relaxation or lessening. This small beautiful island is located between Ternate and Tidore Island, actually. Also, tourists take advantage of its underwater scenery to enjoy snorkeling and photography!

The Nuance
In terms of nuance, Maitara Island consists of numerous features including stunning white sand beaches. The next noticeable feature is the moderate waves, which are suitable for swimming and snorkeling. Not to mention the sea scenery looks unspoiled and the air feels so refreshing. No wonder, tourists won’t find any trash there. What is more? Due to the water clarity, snorkelers are able to see exotic fishes and corals well down there. Also, several boats are parked neatly, which belong to villagers. As for the size, the island has the total area of about 206 hectares. It is also covered by lush trees, bushes, and grasses which make the island looks green and fertile.

Exploring Maitara Island
Due to its strategic location, which is between Ternate and Tidore Island, tourists can easily access Maitara Island regardless of their location. It is true the size is inferior to those islands, but it has an amazing beauty and lush environment. Not to mention the unspoiled nature helps visitors to find peace and relax during the visit. The number of villagers is low, so the nuance is considered peaceful as well.

Aside from the stunning panorama, Maitara Island also has an interesting history for tourists to learn. In a nutshell, the island is quite related to the colonial era especially during the reign of Portuguese. Maitara, in fact, was the first island to visit by those invaders. No wonder, it is used as the background of a thousand Rupiah banknote due to such history. At the time, Portuguese was looking for spices and chose North Maluku as their colony.

No one really knows why Indonesian locals gave Maitara as the name of the island, though. According to some informants, it derives from the Portuguese Language. It is said the invaders were quite impressed with the beauty of the island and shouted “Maihara” at the time. It means the incomparable beauty, actually. No wonder, tourists also come to the island in order to enjoy its flawless panorama, especially in the afternoon during sunset!

How to Get There
From Ternate City, tourists need to take any local transportation service and head to Bastiong Port right away. Once arriving at the port, they only need to rent a speedboat and head to Maitara Island which takes about 30-45 minutes depending on the weather and the number of visitors at the time.

Where to Stay
Recommended hotels reside in Ternate Island.