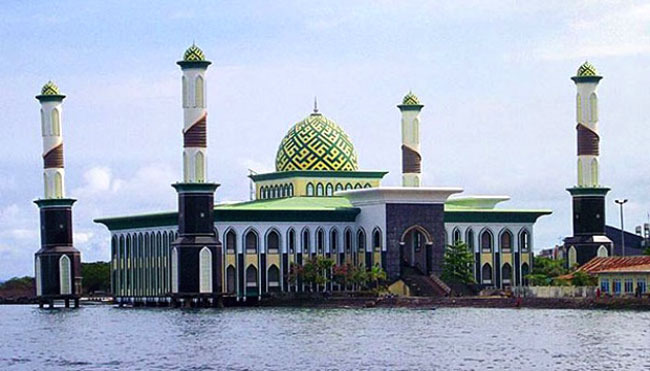 Even though Ternate Island is known for its historical sites and stunning beaches, it has other allures especially holy places like mosques. One of them is called Al-Munawaroh Mosque, which resides in the center of the city. The fact is that it is also the most luxurious one as compared to others. The locals also called it “Masjid Terapung”, which means the floating mosque. It is because the structure was built by the sea, looking like floating on it. For tourists, the mosque is suitable for either sightseeing or photography.

The Nuance
In terms of nuance, the mosque is indeed peaceful as it is built near to the sea featuring breezy wind and stunning sea scenery. The building is constructed in the area of 6 hectares and it has the size of 9512 meters per square. Due to such width, the mosque is able to accommodate up to 15,000 people! What is more? It has two towers (44 meters each) facing the street. Two other towers reside and sink on the sea, though. There is also a huge gate on the entrance. Both the roof and dome has the color of green, actually. Also, according to the locals, most ornaments of the mosque were produced in Turkey!

Exploring Al-Munawaroh Mosque
For some people, visiting a mosque during holidays seems uncommon, no? However, it has become a new trend these days. It is because tourists want to visit some new places especially related to holy buildings. Being the most popular and majestic mosque in Ternate City, Al-Munawaroh indeed becomes a top priority for tourists. The question is what visitors can do once they arrive at the site.

Well, the first recommended thing to do in Al-Munawaroh Mosque is to enjoy the nuance. Once again, the structure resides by the sea so it features breezy wind and warm atmosphere for tourists to enjoy. That means visitors only need to go to the yards of the mosque and feel such comforting ambiance from the spot. Moreover, the sound of the waves soothes everyone who comes to the mosque! Somehow, spending some time there may help tourists to get rid of stresses and eradicate stresses in an efficient manner.

The next common thing to do in Al-Munawaroh Mosque is to witness its mesmerizing design. Both the color and architecture of this building looks amazing, after all. One thing, those who want to take pictures or conduct photography should not disturb worshipers! Also, it is quite important to take care of the environment and avoid littering or spoiling. A mosque is a holy place, so everyone should never ruin its sacredness, including tourists.

How to Get There
From Ternate City, it takes only about 15 minutes to get to Al-Munawaroh Mosque as the distance is 4.5 km. The trip becomes faster if tourists take Yos Sudarso Street and use only the best local transportation service. In some cases, it is recommended to hire a local guide to get further information regarding the mosque including the construction process and history.