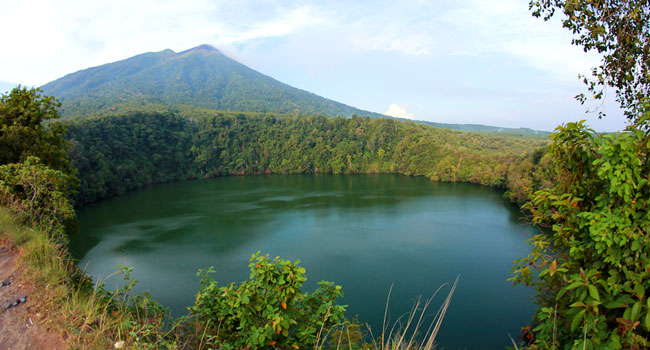 Ngade Lagoon is not the only lake that tourists can find in Ternate Island. It is because there is another fabulous option called Tolire Besar Lake. “Besar” means big, actually. This lake is the sibling of another smaller lake located near to it called Tolire Kecil. Both of them reside in the same area, though, which is Takome Village. Due to its bigger size, this one is more interesting for tourists to visit. Not to mention it holds an interesting legend and history. Plus, it offers majestic panorama which is suitable for photography.

The Nuance
It is, without a doubt, Tolire Besar Lake has a bigger size than its sibling. It has the shape of a giant pan and the size of about 5 hectares. From the top of the tip of the lake to the surface of the water, the depth is about 50 meters. However, no one knows the exact depth of the water. When it comes to the nuance, it features various bushes and trees. Not to mention the view of Gamalama Mountain can be seen from the site.

Exploring Tolire Besar Lake
Being the older brother of Tolire Kecil Lake, Tolire Besar indeed offers a more interesting beauty. The most common reason to visit this Indonesia’s site is indeed to learn the myth, especially related to the story of a legendary white crocodile. According to the locals, this mystical animal often appeared at night! Instead of being a threat, villagers consider him as the guardian of the lake. That means this sacred crocodile has been the part of the site, so everyone should give a respect to him.

Aside from the legend, Tolire Besar Lake is famous for its unique appearance. As mentioned before, it has the shape which is similar to that of a giant bowl. It also has the color of green Tosca, which looks so exotic. Moreover, the presence of lush forest and bushes on site makes it more beautiful and shady. With these natural allures, tourists can take many wonderful photos of the site without involving much effort for sure. Thus, everyone should not forget to carry a camera while visiting the lake later.

As for the tip, visitors should choose the right spot to enjoy sightseeing. In this case, the best one is none other than the top tip of the lake. Not only it provides better views, but it also provides better facilities especially the presence of local food vendors. These people sell delicious snacks like grilled corns, bread, and many more! So, do not forget to carry some money!

How to Get There
For those coming from Ternate City, they need to spend about 45 minutes to get to Tolire Besar Lake. It is because the distance is 20.7 km, but it becomes faster if tourists take Batu Angus Street. What tourists need to do is to get to Takome Village. Next, they need to pass through Tolire Kecil Lake before arriving at the site.

Where to Stay
Recommended hotels are located in Ternate City.