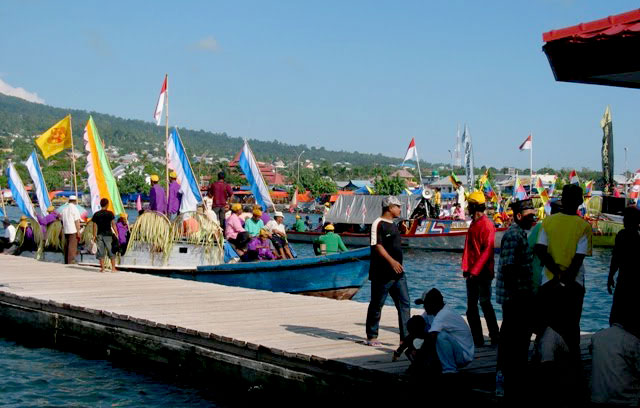 One of the reasons to explore a new region is definitely to watch some local traditions. In Ternate Island, for example, tourists can find Kololi Kie Traditional Ceremony. The locals do this ritual to welcome the solar eclipse, actually. In terms of name, “Kololi Kie” means around the mountain. This tradition has been done for generations by both Ternate and Tidore people. The main purpose is to prevent misfortune and the risk of Gamalama’s eruption. Another benefit of conducting the ceremony is none other than to lure more tourists to visit Ternate Island.

The Nuance
Well, Kololi Kie is done by riding boats and carrying some offerings. The participants also wear traditional attire of North Maluku Province and beautify their boats with several ornaments including a national flag, yellow leaves, and many others. Here is the thing. The boat accommodates many people and many boats that join the event! No wonder, the nuance becomes quite merry and fun. As for tourists, they can only watch the ceremony from afar though. Have no worries. Taking pictures is allowed, so everyone should not forget to carry a camera while watching the event.

Exploring Kololi Kie
Even though Kololi Kie functions as a regular ritual to prevent misfortunes like the eruption of Gamalama Volcano, it has undergone a slight change related to the function. These days, tourists consider it a new attraction that they can enjoy during a vacation in Ternate Island. It is true they are allowed to watch the entire performance, but they must not cause a disturbance on site. Even though it looks entertaining, the ritual remains sacred and important for sure.

In the beginning, the leader of the village may start the ritual by giving special prayers. After that, they start the prime activity which is to explore Gamalama Mountain using an ornamented boat. During exploration, they may drop by in several sacred tombs that reside on the foot of the mountain as well. Not to mention they carry offerings on the boat including foods and groceries. Later, they may throw these away on the sea! During the giveaway of the offerings, these people also cast some prayers to the God in fact.

Tourists who want to witness or join Kololi Kie Ritual should pay attention to several things. First, it is related to the schedule. Before heading to Ternate City, therefore, it is important to gather information regarding when and where the ritual would be done. In this case, taking advantage of a tour agency or guide is indeed helpful.

How to Get There
A trip to Ternate Island takes much time especially for those coming from Jakarta City. From Soekarno-Hatta International Airport, it takes about 3 hours and 50 minutes to reach Ternate. Once arriving at Sultan Balbulah Airport, it is time to visit the nearby village for gathering the schedule of the event before watching it.