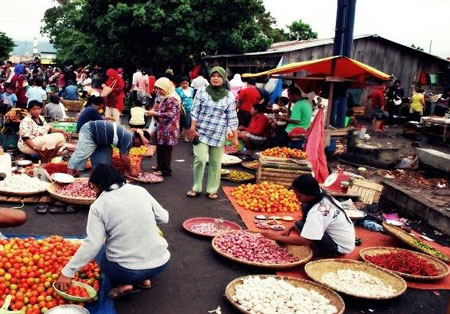 Perhaps visiting a local market when spending a vacation sounds weird, no? Well, for some people, it might be like that. However, for others, it seems interesting and unique. Let’s take an example of a famous market located in Ternate Island called Gamalama. As the name suggests, the name derives from the most famous mountain in the region of Indonesia. Also, it got the name from the location which is in Gamalama Village of Central Ternate Sub-District. As for the function, the market indeed sells numerous affordable products. However, these days, it becomes a new attraction for tourists to enjoy as well!

The Nuance
In terms of size, the market is considered moderate and it consists of several blocks and stalls (selling various types of items). Thus, tourists need to spend some time to get around the market by foot. It is because they should park the vehicle outside before getting in the building. When it comes to the nuance, the market looks old and unmanaged (slum). It is because the Indonesian local government has conducted a recent repainting and reconstruction of the site yet. Despite the fact, the environment is clean and neat due to a good awareness among both sellers and buyers. In some occasions, anyway, the street in front of the market often becomes a place for a rally which is done by students.

Exploring Gamalama Market
One of the allures of Gamalama Market is definitely the history. According to the locals, the market was built in the 1970s. At the time, the local government was inspired by Jakarta’s Senen Market and they decided to use a similar design or concept to Gamalama. That means the building consists of two floors, which is accessible for everyone. The fact is that it is the biggest market in Ternate City! Not long after the inauguration, buyers could access numerous stalls selling various types of products including vegetables, fishes, clothes, and services.

As the time went by, Gamalama Market has been dominated by stalls which offer beautiful and colorful agates! The most interesting fact is that these valuable stones come from different regions including Bacan Island! No wonder, Bacan Agate becomes the most popular product there. As for the price, it varies depending on various aspects including the price, rarity, design, and complexity. Have no worries. The price is negotiable!

Just because agates are the most dominating item to be found in Gamalama Market, doesn’t mean tourists can only found those stones while exploring the site. It is because several stalls remain to sell traditional products like groceries and clothes. Thus, make sure to explore the market thoroughly! Not to mention it is important to come with a local guide for the sake of an easier price negotiation or bargaining.

How to Get There
From Ternate City in Indonesia, it takes only about 13 minutes to get to Gamalama Market as the distance is 4 km. What tourists need to do is to get to Central Ternate Sub-District first. Next, they only need to reach Gamalama Village where the market resides. It can even be done faster if they take Hasan Eka Street, in fact.