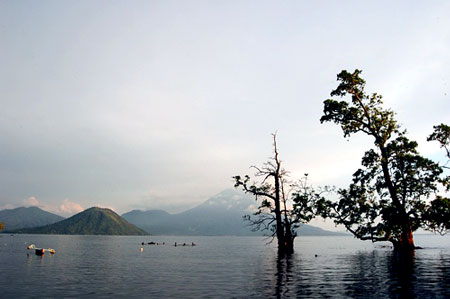 Here is the next reference to stunning beaches of Ternate Island. The name is Sasa Beach and it is located in South Ternate Sub-District. As the name suggests, it resides in Sasa of Indonesia. However, what makes it unique though? According to visitors, this beach is famous for its panorama and a lonely tree that grows in the midst of the shore. This explains why most visitors would carry a camera and enjoy photography on site. Another reason to visit the beach is to conduct an exploration, as the site is located near to a hill which is suitable for short trekking.

The Nuance
In terms of nuance, Sasa Beach has several features including brown sand and deep sea. The waves are considered strong, so it is not recommended to swim there. As mentioned before, there is a lonely tree growing on the sea! Due to this rarity, all visitors are likely to take pictures of it during the visit. Next, on the horizon, tourists may see a green hill with some buildings on it. Those also become a good object to capture, somehow.

Exploring Sasa Beach
The most attractive object in Sasa Beach is none other than the lonesome tree located in the midst of the shore. It, without a doubt, becomes the best object to capture for those who love photography. The thing is that tourists need to get close to the tree in order to get the best angle. In order to avoid big waves, it is recommended to approach the tree during the low tide. Have no worries. The patience has a great reward!

The next recommended activity to do in Sasa Beach is trekking or exploring nearby hill. As mentioned earlier, there is a lush hill located near to the shore. Even though it takes some efforts to get to the top of the hill, the view is quite breathtaking up there. Once again, do not forget to carry a camera to capture beautiful pictures after arriving at the top of the hill. For first-timers, though, they must consider hiring a local guide to explore the hill in an efficient manner.

Another allure of Sasa Beach is the presence of sea turtle conservation site. It is managed by the locals, so the facility looks modest and undeveloped. Despite the fact, sea turtles are able to grow well here until they are suitable enough to get to the sea. As for tourists, they are allowed to learn how to cultivate these cute animals and take pictures of them freely. Isn’t that great?

How to Get There
For those coming from Ternate City, they may only need to spend a trip for about 26 minutes as the distance is 10.1 km. It can even be faster if they use the best vehicle and take Batu Angus Street. Their first destination is South Ternate Sub-District. Next, they only need to get to Sasa Village and reach the beach right away.