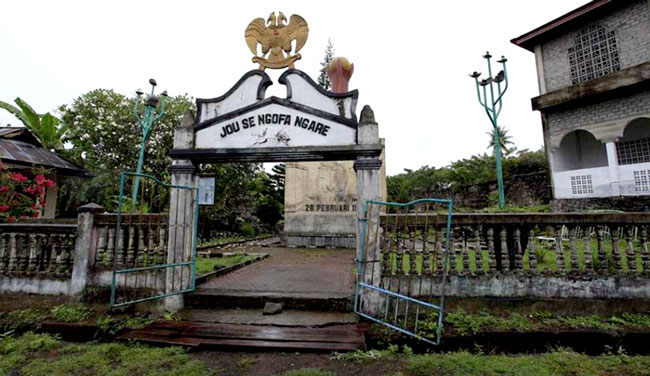 Ternate is called the island of a thousand of fort not without a reason. It is because can find many Indonesia’s historical structures left by the invaders during the colonial era there. One of them is called Kastela Fort! As the name suggests, it is located in Kastela Village and becomes one of the significant tourist sites in Ternate City. Not only it owns a historical value, but the fort also becomes a nice place to spend family recreation and enjoy various types of activities including photography, sightseeing, and exploration. Not to mention it is known among outsiders as well!

The Nuance
In terms of condition, Kastela Fort has undergone deterioration due to age. It doesn’t become a problem for those who visit the site, though. It is because they consider it unique and historical. The good thing is that the management takes a good care of the environment, so it appears neat and comfy. These people even arrange the piles of ruins in a good manner, with a purpose to prevent visitors from getting discomfort during the visit. According to the keeper, the fort (in the past) had the total size of 2724 meters! However, today, it only remains the half of it.

Exploring Kastela Fort
Kastela Fort indeed has an interesting history for tourists to learn. It is said the fort took much time to build, which is about 20 years! The first name was Nostra Senhora de Rosario Fort, which means a beautiful lady with roses. No one knows why the locals gave such name, though. Another name was given to it by the locals, which is Gam Lamo Fort. It has a meaning of a big village, actually.

The unique fact is that Kastela Fort had the basic material of woods. It also has a dark history regarding the betrayal of truce done by the governor of Portuguese towards Sultan Khairun (the king of Ternate Kingdom). The truce was made in Kota Janji Fort, actually. However, the Portuguese became too greedy and broke the treaty without any regret. They had only one reason, which was to dominate the spices market at the time. They even killed the Sultan at Kastela Fort! Thanks to the son of the Sultan, Baabullah (the next king). The locals were able to launch a big-scale attack and get rid of the enemies efficiently.

Today, Kastela Fort becomes one of the best historical sites located in North Maluku Province, Indonesia. Not only tourists visit the fort for its history, but they are also interested in the nuance. That means they may carry a camera and conduct photography on site. What they only need to pay attention is the environment. Simply said, littering is highly prohibited.

How to Get There
For those coming from Ternate City, they can take advantage of local transportation service to get to Kastela Fort. The distance is 8.7 km, so the trip may take approximately 20 minutes only. It becomes more comfortable and faster if tourists take Batu Angus Street, for the information. Well, their main destination should be none other than Kastela Village where the fort resides actually.