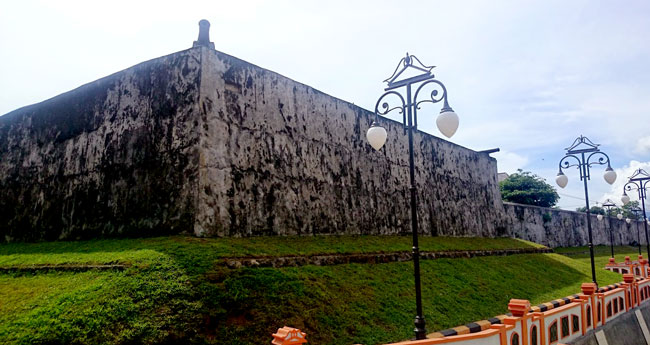 One of the main allures of Ternate Island is none other than the history. It is because the island was invaders’ main destination in looking for spices. These include the reign of the Dutch and Portuguese! They even built several buildings including forts! For example, there is the Dutch’s Oranje Port in Central Ternate Sub-District. Not only it becomes an important historical asset of the region, but it also acts as a new tourist attraction in Ternate. Both locals and outsiders are interested in visiting the fort in order to learn the history and take pictures in front of it, actually. No wonder, it becomes one of the prime attractions in North Maluku Province and has been visited by lots of people over time.

The Nuance
Oranje Fort is located in Gamalama Village and it has an easy access, so tourists are able to get there fast without the help of a tour guide. In terms of nuance, the fort indeed has tons of historical values for tourists to enjoy. In the front of the building, tourists may find a park featuring decorative lights and fountains. Not to mention a big orange signage can be seen on its wall. Inside, tourists may see old cannon right away located on an open field. The good thing is that visitors are allowed to climb the fort and take pictures freely there!

Exploring Oranje Fort
Once arriving at Oranje Fort, tourists can start looking for information regarding the history of the site. This includes when the construction began, actually. According to the locals, the fort has been there since 1607 during the reign of the Dutch’s governor named Matelief De Jonge. In fact, it is the part of Malay culture and had the previous name of Malayo Fort. In terms of function, this structure was used by the Dutch as the administrative center. Also, in fact, the fort had been used as a place of exile for Sultan Badarudin II.

The next thing that tourists may find in Oranje Fort is the presence of a small building used as the home of the Dutch governor at the time. Today, though, it becomes the government office so tourists can’t enter it carelessly. Have no worries. Visitors are allowed to get around the fort and witness the beauty of the nuance on site. Not to mention they have the chance to take pictures of the fort and its surroundings using a camera. The best object to capture, perhaps, is the cannon located inside. So, make sure to take selfies in front of it as well.

The next impressive feature of Oranje Fort is the presence of park with numerous decorative plants, fountain, garden lamps, and indeed the orange signage. This is why visitors can take their time on site either for relaxing or photography (aside from learning the history from the tour guide). Still, everyone should avoid littering or causing havoc inside!

How to Get There
The distance between Oranje Port and Ternate Island is only 3.5 km. That means a trip to the site may take approximately 11-15 minutes! In fact, tourists are able to get there faster if they take Yos Sudarso Street and use the best transportation service.